If you’d like your new Canadian home to be surrounded by some of the most beautiful scenery in North America, you’ll want to look into buying a place in Banff, Alberta.  Sure, it’s a tourist town, and it’s surrounded by Banff National Park, but that just means you’ll be visited by a lot of your American friends. 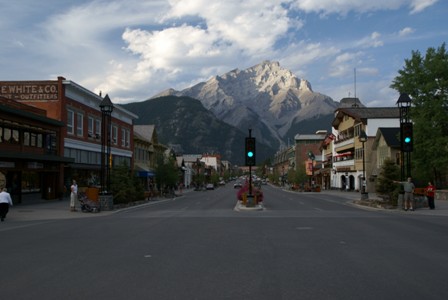 Banff won’t be cheap.  Expect to pay a lot, but you’ll get a lot, too.  There are numerous hiking trails within minutes of town, and dozens more within an hour’s drive.  You’ll never get tired of those stately mountains, but you might get tired of the weather.  Expect a lot of snow.

If Banff is a bit too high-priced for you, drive east just a few miles, and settle into Canmore instead.  This was a coal-mining town that has quickly turned into another tourist center.  As you can see, there are still plenty of mountains nearby, even though you’re now outside the confines of Banff National Park.  Hiking trails abound at the nearby Spray Valley and in Kananaskis Country.

The scenery only gets better as you head north from Banff and Canmore.  The Icefields Parkway is widely considered to be one of the most beautiful roads on the planet, as it passes through glacier-carved valleys. You can even walk on a glacier that’s still around — at least until Donald Trump destroys it.

At the end of the road, enjoy Jasper, Alberta.  This tiny town is tourist-friendly, and many residents rent out rooms to visitors to help supplement their income.  Downsides include a long drive to the nearest big city (Edmonton, about 4 hours to the east), and the potential for harsh winters and -40 degree temperatures.

You can read more about my visit to the Canadian Rockies in late summer here, and in winter here.

What do you think?  Would Banff make a good place to live?  Did I miss a great Canadian town that should be on the list?  Want to yell at me about the results of the election? Hey, that’s what the internet is for!  Throw in your two cents in the comments below.

Oh, and you can also check out my guide to visiting Canada for Americans and my guide to Visiting the Rockies in Winter.  And if you decide to go for a visit, use the Booking.com search box on this page.  It’ll give you a great deal, and you’ll help support TakeMyTrip.com!

Yeah I still take some pictures :)
I do love a dirt road. .
From that time I drove a few hundred miles out of my way to head towards a potential snowstorm. Was that really just a couple of weeks ago?
Mentally I'm still in #utah ... This is from last week. .
Just a few days ago in #utah .
... and Arches. It was amazing last January.
Thinking a lot about Zion this time of year. From 2017.
Check out the license plate sculptures I'm selling on Etsy! Hand crafted from real classic license plates. I take requests!

What a surprise!  There’s a great waterfall that’s very easy to access, right alongside the Beartooth Highway.  But, it’s very easy to miss, and there ...
Loading Comments...
Comment
×